Toronto drivers are wackadoodle! That’s the official clinical term. For the record, I’m an “assertive” driver but nowhere near the level of lunacy around here. I learned to drive in Montreal, which is known for being fast and furious. When I was 15, my dad took me for driving lessons in his giant Chrysler, letting me circle around the lake at the summer cottage.

As soon as I was 16, I signed up for lessons and got my license. Around the same time, Dad bought Mom a Toyota Corona. She didn’t like driving so guess who got to use that car. I drove to my college campus, around the hood, to the bars with my friends. Yes, it was a reckless time and the freedom was exhilarating. When I moved to Toronto in 1977, I noticed I drove more aggressively than Torontonians, which is probably why I got a few speeding tickets.

I felt right at home when my husband and I moved to Houston in 1985 because Texans drove like Montrealers, proclaiming their self-confidence with a gun rack and rifle displayed in the back window of their pick-up trucks. Now that we’re back in Toronto, I’ve discovered that this generation of drivers are either dawdling grandpas/grandmas or demolition derby drivers, all of whom are batshit crazy! Seniors go 15 MPH (about 25 KPH) along major thoroughfares; derby drivers hit 60 MPH (about 95 KPH) in residential neighborhoods. Both age groups like to pull into an intersection even if cars in front of them are backed up to the corner. That way, no one can proceed as expected.

One of the scariest thing here is turning left on a red light. I’m not talking about the legal turn when there’s no oncoming traffic or pedestrian crossing. I’m talking about four or five cars whipping through the intersection and turning left after the light is red! As a confident driver, I understand the compulsion to go fast, the need for speed, breaking a few speed limits to get where I’m going. 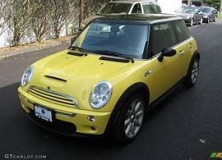 In 2005, we bought a Mini Cooper, my baby – Miss Bee. I loved that car: six-speed, leather interior, sturdy, all the bells and whistles, great on long stretches of highways. Sadly, Bee got left behind in the cross-country move.

That being said, Torontonians scare the hell out of me! Let’s evaluate the two categories of drivers here. Seniors can’t see over the dashboard (shrinkage with age); whether they’re on a side street or the highway, they’re like the tortoise crossing the street – slow and plodding. No rush, plenty of time to get to the grandkids. If the light turns red, they go through it because they can’t see that far or they linger at the corner long after the light has changed. Cars honk, pull out in front of them, shoot the bird. Then there’s the Indy 500 drivers. As they approach the corner and see the yellow signal, they accelerate to beat the red light without worrying if someone is trying to go left or cross the street. Negotiating oncoming traffic is akin to driving into battle on a tricycle instead of in a tank.

Waiting at a red light, you expect oncoming traffic to notice the yellow signal and come to a stop in due time so those turning left can get through the intersection. It doesn’t happen that way. Even if there’s a green arrow to facilitate turning, both types of irrational drivers ignore it and plough through, as many as three to five cars at a time, leaving you stranded in the middle of the street. I’ve figured out the problem. The lights stay red for 45 to 60 seconds, much longer than I’ve seen in other cities. Drivers here believe that’s an infringement on their important time so they fly through without giving anyone else a chance to go. Obviously, very important people cannot be concerned with civility or your safety. The old folks, well they just don’t know what’s going on. Similarly, stop signs are an inconvenience that one just blazes through without remorse, regardless of age.

There’s also a lack of understanding about the purpose of lanes, those lines drawn on the road to indicate order. If you need to move over, for whatever reason, forget about it. A lot of drivers like to swing wide when turning a corner despite there being other cars nearby. It’s obviously much easier than navigating tightly in your lane. I think you’re supposed to get a ticket for doing that, but not here. It’s the norm. The older folks just zigzag and sway back and forth as the spirit moves them. For the crazies, staying in their lane is merely a suggestion, especially on the highways. To survive, you check the rear-view mirror, take a quick look back, hope you’ve covered the blind spot, close your eyes, and move over. You may or may not make it all the way because there is no yielding in this game.

I have a separate category of motorists I consider to be certifiably nuts – the “drive like you don’t give a damn” group. They’re not only rude in their aggressiveness but they’re certain they have the right of way. There’s no arguing with them. They don’t approach an intersection or on ramp; they press down on the accelerator, stare straight ahead not looking left or right, and charge through, other cars in the area notwithstanding. They pull in front of you if they think you’re going too slow or because you’re driving an older Volkswagen station wagon that’s obviously not as cool as their Jaguar SUV. And forget about merging seamlessly onto the highway. You don’t deserve to get in a lane if you don’t press down hard on the gas and careen over the line.

Admittedly, traffic in general in Toronto is problematic. The city and its four adjacent municipalities include close to seven million people. That’s a lot of bodies in cars on the roadways. But that doesn’t justify the frenzy that takes hold of everyone. There’s a great public transportation system in place using subways, buses, and streetcars, which are very widespread and accessible. But I guess that’s too plebeian for local residents. It’s much more fun to terrorize the more conservative drivers or make the normal ones go mad. For someone who considers herself a confident driver, I’m turning into a cranky old lady who just wants to get to where I’m going. No matter how daunting it feels, I’m still willing to challenge Toronto drivers who cut me off, don’t let me turn, tail gate, or wander into my lane. I may be a senior citizen but I still drive like I did when I was twenty-something. Maybe I should put a gun rack in the back of our VW wagon just to show everyone who’s really the boss of the roads.